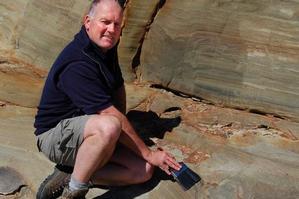 Greg Browne has studied the marks for years.

Dinosaur footprints found in northwest Nelson have given scientists their first proof the beasts roamed the South Island more than 70 million years ago.
The prints are in soft sandstone on private and Department of Conservation land over an area of about 10km and up to 20 appear at one spot alone.
Their exact locations will be kept secret to protect them and their private owners, but scientists will make moulds so copies can be preserved and available to the public.
The prints are likely to have been made by sauropods, large plant-eating dinosaurs between 2m and 6m long that weighed several tonnes.
Geologist Dr Greg Browne made the discovery a decade ago, but it wasn’t made public until now.
Browne said the dinosaur link only emerged after several years of study.
“The structures show evidence that they were formed by something large and heavy that depressed the sand downward because of the load,” he said.
The round markings, up to 60cm across, would have been made in beach sand and preserved by “wet sticky mud” washed in by the tide.
“What makes this discovery special is the unique preservation of the footprints in an environment where they could easily have been destroyed by waves, tides or wind.”
GNS Science paleontologist Dr Hamish Campbell said scientists have yet to decide the best way to protect the prints.
“These are great features from a scientific point of view and because they relate to dinosaurs the public will be incredibly interested.
“Somehow we’ve got to balance the interest of the public with privacy and conservation. Maybe one day there’ll be a dinosaur park or reserve where people can see them,” he said.
The latest find will be published in the New Zealand Journal of Geology & Geophysics next month.

By Heather McCracken – HERALD ON SUNDAY