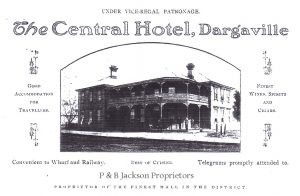 n July 29th the team headed off on another road trip, this time up north to Dargaville, to spend the night investigating ongoing paranormal activity within the Central Hotel. The Hotel sits directly opposite the mighty Northern Wairoa River and is located at the corner of Victoria and Edward Street Dargaville.

Constructed in 1901, during the Kauri logging and ship building era, the first hotel on the site was known as the Kaihu Hotel until it burned down on the morning of Saturday 16 February 1901. One man, named James Carmody, didn’t escape the fire. The victim’s bones were discovered amongst the ashes after the fire and an inquest was later held to determine the cause of death. The hotel itself was completely destroyed. The licensee of the hotel, Edmond Moriarty, had previously been the publican of the Pahi Hotel which coincidently had burned down in September 1897, when he had been in charge of that establishment.

Auckland based Architect John Currie designed the new hotel and had advertised for tenders for the erection of the new replacement hotel in March of 1901. Currie was also the architect for the new Pahi Hotel and also possibly the Maungaturoto Hotel.

Staff have reported hearing unexplained activity in the two bars in the hotel. this included more possibly physical activity; glasses being banged down on the bar when no one is there. In the Club bar, the sound of a glass being put down loudly on the bar has been heard by all staff. They hear it while they are working in the Lounge bar and when they go through to serve whoever it was who was trying to get their attention there the bar is empty.
Beds in some of the rooms were found messed up with no apparent explanation. The bed in Room 14 is sometimes messed up with an indent in the pillow (as if someone had been lying in the bed) and shadows have been seen in the hallway leading to that room.
People have reported seeing shadows and movement downstairs and in the upstairs hallways.
Previous Australian paranormal students who stayed at the hotel a few years prior to our visit had mentioned to the owners claimed to have had ”very positive readings” on their equipment, in their time there.
Staff monitoring the DVR security video system have also noticed balls of light moving around the gaming machines in the Club bar.
The present owners reported coming into the bar one morning to find every piece of paper that had been on the walls around both bars was on the floor.
They also told us that they have talked to previous owners and that they too tell similar stories of the ‘ghost activity. One of the people we spoke to told us that they feel that there is ‘something’ around the middle of the stairs. The owner told us that when they first came to the hotel it was rundown and uncared for and they were felt that the building was hurting due to having mistreated by bad tenants.

It is a lovely old building.
The current owners really care for the building and it shows. We noted a few old photos of the hotel from a few years ago on the walls around the bar area and the building looked very scruffy and unkempt at the time these earlier photos were taken.
The building is now well maintained and has a pleasant atmosphere.
The main focus of our investigation took part in the hotel guest room no 14. a small unassuming room, small, clean, and comfortable, and was very similar to the other single rooms in the hotel; so we were surprised when the owner told us that most people look at the room and refuse to sleep there.
She told us that in the last four years the room had probably only been used 5 or 6 times, as it is never chosen and they don’t like to put people in it due to the activity experienced in and around the room.

There was a dining room, kitchen, a small office with reception area, and storerooms on the ground floor.
Beside the office, there was a beautiful carpeted staircase, which lead to the accommodation.

Once up the stairs, there was the manager’s accommodation and two accommodation wings on either side of the landing.
To the right was the main accommodation wing where there were 8 guest rooms with a bathroom and toilet block at the end of the corridor. There was also a small guest kitchen, storeroom, and a guest lounge with a door out to the balcony that ran along the front and side of the hotel.
The balcony overlooked the river across the road, as did the room at the front of the main accommodation wing. This room was being renovated at the time of our visit (although we did have access to it and all rooms in this wing).
The other wing was to the right once at the top of the stairs and was not used often.
It was only opened if the main wing was fully occupied.

We conducted several EVP sessions in Room 14 as well as the hotel corridor that led to room 14.
Barbara and Mark also did a separate EVP session early on in the night on the steps of the hotel. We also did EVP sessions in both Bars of the hotel.
We asked the usual questions we normally do during an investigation, although a lot of our questions were focused on establishing contact with the diseased James that had originally died in the hotel.
Some of the viewers of a short Facebook live-feed we thought we’d do at the time, commented they felt there was a little girl in the hotel, either age 5, 7 or 9.

Approaching the end of our investigation that night, all team members sat quietly in the corridor where we had the a laser grid and cameras set up.
Marlene sat with her back against the wall of the upstairs corridor, with the stairs facing to her right.
During one of these quiet sessions, she reported hearing the sound of someone approaching the upstairs landing. ”It was very distinct, clear, and almost sounded “in detail”. It sounded like someone trying to walk very slowly upstairs hence the creaking on the wooden steps was very pronounced. Barbara at the time next to me also heard it. It was different than just the normal creaking sounds and thumps an old building makes at night.”

We had some interesting large Electromagnetic spikes that were picked up by two different branded EMF meters at the time. These were in room 14.
However, we were able to establish that these EMF readings were generated from only one tiny spot on the floor, which makes it more plausible that it is electric wiring or something situated directly underneath that room (on the first floor) that could be giving off regular EMF.

There were a few odd noises heard while doing communication sessions in the bars but the one that stood out for the team was what sounded like what could have been a glass being put down heavily on the bar. (This was a noise that the staff had reported as having been heard by all staff members at times. They would go to the bar to serve whoever it was and no one would be there)
Another audio incident of interest; Marlene and Barbara reported hearing what sounded like two definite heavy footsteps on the main stairs as they were packing up.

The investigation went really well and the team worked well together. We got all areas of interest in the hotel investigated and documented. As a team, we were able to take hundreds of photos, many hours of video, check baseline EMF levels and temperatures and monitor them throughout the evening, investigate thoroughly all areas of interest in the hotel, hold numerous communication sessions in key areas and monitor the hallway, where shadows had been seen, for movement using a laser grid and multi-camera set up. The entire investigation was also recorded on audio and video. Individually we were able to set up video cameras and audio recorders in each of our rooms in an attempt to capture any activity that may have occurred as we slept.

The Central Hotel was a lovely heritage building and we really enjoyed our investigation there.
The owners were very welcoming and were happy to recount stories about possible paranormal activity they had experienced as well as stories they had heard from others. Despite conducting a full overnight investigation and sleeping in the room where a lot of the activity is supposed to be centered around, we did not experience anything that convinced us that the hotel is haunted.
We did hear (and record) sounds of movement, possible footsteps, and a door squeaking but these all could have rational explanations. There were unexplained occurrences involving torches malfunctioning while we were conducting a communication session and sounds recorded in the bar however these are not necessarily paranormal events.
Therefore at this moment in time, the team can’t say that the hotel is haunted….. but then again we can’t say that it is not either.