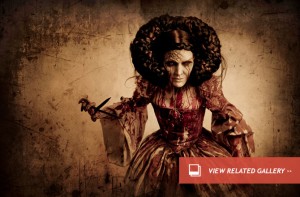 She goes by many names including Mary Worth, Mary Jane, Mary Lou, Mary Worthington, Mary Whales and Mary Johnson. But you probably know her by another, more fearsome name: Bloody Mary.

Some say that Mary was a witch who, at the height of the infamous Salem Witch Trials, was burned alive and her charred body buried not far from where you are now. Others claim she was a beautiful hitchhiker who was killed not by a hook-handed maniac but instead in a horrific car accident. Before she died — if indeed she did die — she was badly mutilated

Whatever her otherworldly disposition, in order to meet her you must perform a ritual. It’s a group activity in which members dare each other to perform the ritual, usually alone while others stand guard. The Bloody Mary ritual is what folklorists call a “fear test,” or what most people simply call a dare.

There are many versions of the story, and the details change depending on the location, culture and era of those searching for her.

Jan Harold Brunvand, author of over a dozen books on urban legends, describes the basic story in his “Encyclopedia of Urban Legends:”

A person — often an adolescent girl — is supposed to chant something “a set number of times (3, 10, 50, 100, etc.) while staring into a mirror in a darkened room (often a bathroom) — sometimes lit by candles — in order to summon out of the mirror the avenging spirit of a witch or ghoul.”

Sometimes Mary only appears after a toilet has been flushed or a candle is blown out. Sometimes a stream of hot rushing water is turned on, adding to the sensation of fear and also fogging the mirror to allow weird images to form. With the darkness, candle and attempt to summon spirits, the Bloody Mary ritual has echoes of a Victorian-era séance.

The fact that the legend involves a mirror is no accident. Mirrors have been the subject of legend and superstition for millennia.

Mirrors are mythologised as windows into other worlds, a literary device used by countless authors from Lewis Carroll (in “Through the Looking-Glass,” his sequel to his classic “Alice’s Adventures in Wonderland”) to J.K. Rowling’s Harry Potter series.

Of course we all know that broken mirrors bring bad luck, but hundreds of years ago mirrors were customarily covered in the presence of the sick or dying, lest the patient glance in the mirror and see the face of Death in the reflection.

The meaning behind the urban legend is also murky. Folklorist Alan Dundes, writing in the journal “Western Folklore,” adopts a Freudian take. Noting that the action always occurs in a bathroom, sometimes involves a toilet, and often includes the sudden appearance of blood, Dundes argues that the Bloody Mary ritual is associated with the onset of menstruation and is a form of ritual initiation to womanhood for many teen girls.

Others are not convinced. Folklorist Gail de Vos, writing in “What Happens Next? Contemporary Urban Legends and Popular Culture” notes that “despite Dundes’s emphasis on the young females performing the ritual, I have discovered that players of the ritual included both genders.” At the very least, it’s an enjoyable bonding ritual for many teens and pre-teens.

Some people associate Bloody Mary with the legend of La Llorona, the weeping woman of Hispanic lore who drowned her babies and searches endlessly for their souls, calling out in the darkness.

Others say it traces back to Mary I, Queen of England, infamous for her persecution of Protestants.

As with most urban legends, trying to pin down an exact origin is futile. In any event it has been around for decades and is here to stay in one form or another.

An updated version of the Bloody Mary legend was made into the horror film series “Candyman,” and Investigation Discovery has a new special about female murderers called “Bloody Marys” airing Halloween night.

What Could Go Wrong?

So what happens when Mary is summoned? Most people chicken out long before the final syllable is spoken, running out of the darkened bathroom with a semi-serious shriek. But what if you are brave enough to actually complete the ritual? There are rumors that some have survived to tell the tale….

Others insist that if you see Mary in the mirror she won’t hurt you immediately, but she will follow you home and haunt you.

The truth is that, after researching the subject extensively, interviewing paramedics who have seen Bloody Mary’s gory handiwork first-hand  — and also grisly autopsy results — I have a pretty good idea what happens when Bloody Mary attacks. But it’s so disturbing and horrible that my editors will not allow me to describe it. You’ll just have to try it yourself… If you dare.