Now that’s a question I get quite a bit. Thrown from a distance, and usually from the safety and anonymity of the computer screen.

Well, yes actually, we are quite serious.

Because ghosts have very little definitive evidence for their actual existence, it might be easy for some to just blindly accept what science tells us and dismiss all notions of the afterlife. Even worthier of our ignorance; interdimensional or extraterrestrial beings, as yet unknown or undiscovered animals and the psychic realm. However, many, MANY respectable, intelligent, mentally healthy and perfectly normal people, worldwide, for thousands of years have been seeing and experiencing these phenomena. This to me, is the big flaw in science’s conclusion. This is the one thing that annoys the sceptical of mind. These people can’t all be crazy, deluded, intoxicated or liars. That wouldn’t be rational thinking. Would it?

Some of us like to think outside that proverbial box. People are seeing something. What? What about mass sightings? Apparitions or unusual phenomenon experienced by a crowd of people. These experiences don’t deserve to be dismissed and disregarded just because they don’t fit the standard criteria. As a research and investigation group, it’s our ‘job’ to look into these things. To theorise and hypothesise. Observe and experiment. To document and correlate data.

Are we serious? Yes, very. There are questions that need and deserve answering. However, it’s not all straight faces and noses in data. We make mistakes. We do silly things. We can even be total dicks sometimes! We’re human after all. Sometimes the urge to ‘play up’ is unescapable. Sometimes the situation just screams out for a comedy routine to unfold.

Back in the eighties, when I was with my old Auckland Ghost Hunting Group. The three of us were investigating a block of three allegedly haunted buildings in an industrial area in Panmure. Three buildings. So, not thinking quite intelligently, we decided we should spilt up individually and investigate each building solo, then alternate after an hour or so.

In my building I found an old wooden ladder. Looking up, nearby I spotted a partially opened handled panel in the ceiling, leading to a possible storage room or attic crawl space. Within minutes I had the ladder in place and was eagerly ascending into the roof’s interior of this very large, empty and unused workshop.

Little did I know that Craig, one in the team, had come in to look for me. He didn’t see me, but figured that the ladder (just sitting there) would be useful back at his building.

So he grabbed it and left. After about ten minutes of crawling around in the dust and thick matted, body clinging curtains of spider webbing, I decided to head back down to check out the rest of the building. Lowering my legs back down the hole, flailing wildly around for the top rung, it suddenly hit me that the ladder was now not below me at all. Popping my head out, I could see it was no longer there. Thinking it was one of the guys playing a joke, I yelled out, “yeah yeah, good one!”

No reply, not even an expected snigger. After a few more attempts I realised I was alone in the building. It wasn’t until the guys came in to alternate buildings, that I was saved. Thirty minutes of sitting; twenty or so meters above the ground, in rat droppings, on a thick coating of dust and an impenetrable wall of webbing, later! Let’s just say, from that moment on I was forever weary of ladders. Boy did we bumble around naively back then. Real amateurs we were.

I remember one hilarious and embarrassing investigation, when we were invited to look into mysterious goings on in a flat in the middle of a block of Pakuranga units. There was someone living there, but they were away, so had given the landlord permission to let us in so we could look for some answers and hopefully explain the activity. We were told that the door would be unlocked and to just go in and ‘do our thing’. On entering the unit, we noted that the television was on. We figured this was a security measure to deter any would-be burglars. We put our bags down in the lounge and started setting up our equipment.

All of a sudden Craig whispered “sssshh, did you hear that?”

Jumping to an excited state of alertness we tuned our ears in anticipation. There it was again…a faint, but definite, “Hello, is someone there?”

Quickly moving around a corner, heading in the direction of the sound, we were confronted by a very bewildered elderly man, covered only in a towel around his waist, peering out in fear from his bathroom.

We were in the wrong unit.

Let’s just say that with age and maturity, came experience and a semi- professionalism when it came to paranormal research. Learning as I went. Still making mistakes but still learning from making new ones. The hilarity still ensues though, it must come with the field.

Recently, at a private residential investigation of a Whitford based farm house, Sam, Carolyn and I were outside, surveying the exterior. It was dark; torches in hand, cameras clicking away to document the rustic surroundings. Suddenly we heard a noise and caught a glimpse of something moving in one of the windows. Getting up close and shining our torch in, we jumped back when we saw it was a person, busy, sitting on the toilet.

Sometimes it’s just a plain lack of momentary thinking. Like, this one time when Sam was looking into an unusually high EMF reading coming from an area of a room in a private dwelling out Hobsonville way. Having the same model meter as him, I got mine out to try and confirm what he was picking up. I got no reading. My EMF meter was flat and not reading anything. A short few seconds of confusion later and it dawned on me that I hadn’t even switched the meter on! It’s hard to maintain that air of experience and skill, when you screw up on the little things. 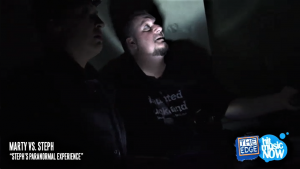 During a radio promotion from The Edge, where we were invited to take one of the radio presenters around the Spookers building at Kingseat Hospital as part of an on-air challenge. A moment of sheer terror hit, when Barbara suggested we all go into a room to try a communication session. When all in, Barbara said “let’s just close the door to avoid any noise contamination.”

On slamming the door shut we noted that the rooms were all keyed from outside and had no working door handles from the inside! Gulping back the sudden lump in my throat, I jumped to the door and tugged frantically. Door knob just turning loosely in my hand. A great sigh of relief all round after a solid yank, pulled it back open.

Especially Steph, the radio presenter, who was already in a total shaking and tearful state of fear and absolute panic. Then there’s all the standard stupidity we get up too when a location is dark and the temptation to jump out at a team member or throw something, becomes too overwhelming to avoid.

I guess, if anything it shows we are just ordinary folks, with a penchant for wild ideas, a silly sense of humour and the ability to faux pas and learn from it.

Are we serious? Maybe not all the time.