Thought I’d share a couple of books I purchased back in the early 90s from a very old, used book store, whilst traveling around France.
I stumbled upon this store completely by chance as I wandered a small junk and produce market set up in a paved and very ancient town courtyard. (I wish I could remember its name!)
A little brass bell on the door signaled my entrance into this incredible find. Books stacked from floor to ceiling. Shelving lining every wall; again from floor to ceiling.
The central floor space was jammed with tables, stacked dangerously multi-level high with books.
From paperbacks to much sought after, leather-bound rarities with triple-figure price tags.
Using my well-referenced pocket-sized French to English phrasebook, (this was pre-cell phone /internet etc) I asked where I might find any books about ghosts, UFOs and things unexplained.
The old man at the counter looked a little perplexed, causing me to quickly flip through my book for fear I’d misquoted and asked something ridiculous or non-sensical instead.
Long story short, I hadn’t read it incorrectly and my request was fine.
It so happened I’d walked into an Occult bookstore. The walls, floors and tables were brimming with everything I was interested in and looking for!
The guy knew his stuff too. On asking where I was from, he raised his index finger and said ”ah, over here”. He pulled out a book from a wall unit straining under the weight and said ”You know him?”.
It was Hauntings and Apparitions, by Andrew MacKenzie.
I’d heard the name before but didn’t know too much about him, only that he was from New Zealand and wrote about ghosts.
I left the store with two books under my arm, after about an hour and a half of browsing. My mouth open in sheer awe at the wealth of information jammed into those old wooden shelves and wishing I had more money to spend and unlimited luggage space with no travel weight limits.

Andrew Carr MacKenzie (1911–2001) was a journalist, novelist and parapsychologist from New Zealand. 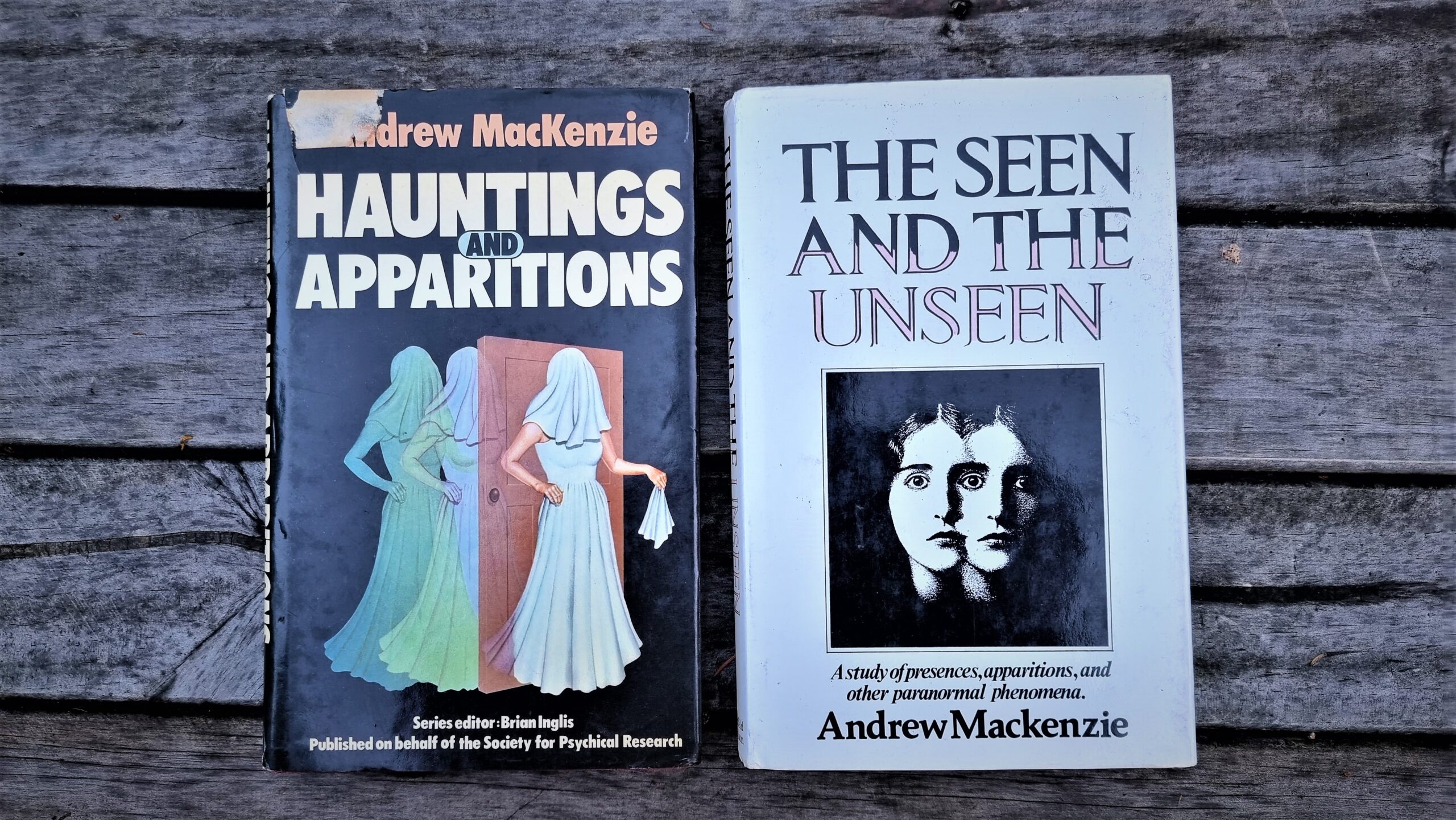 Born near Dunedin, New Zealand, Andrew started his journalistic career working in Wellington as a writer for The Evening Post until 1938, when he later moved to England where he became a columnist for Kemsley Newspapers.
He fought in Asia during the Second World War, rising to the rank of Captain and distinguishing himself in guerilla warfare.
He then returned to journalism in London, writing for newspapers on the visual arts.
He published numerous detective and police thrillers in the 1950s and authored quite a number of books on various supernatural topics.
Andrew MacKenzie was (and still is) a well-respected and science-based investigator of the paranormal.
He became interested in paranormal phenomena while researching articles for a popular magazine in 1961. Andrew joined the prestigious Society for Psychical Research and was elected to its governing council, later becoming a vice president and has been described as a leading researcher in the field of psychical research in the 1970s.
A dedicated paranormal researcher, Andrew regularly in-depth fact-finding investigations.
A few of note are the 1990 Suffolk village case, in Kersey with William Laing, who believed he had earlier experienced a time-slip there. Other cases extensively researched included the prolific Cheltenham haunting (one of my own personal favs) and the Edgar Vandy and Palm Sunday mediumship cases.
The ‘Cheltenham Haunting’, ‘Morton Ghost’ or the ”Pitville Woman in Black”, a few of the labels given to the case, first came to public attention in 1892 when an account was published in the Journal of the SPR under the title Record of a Haunted House.
This fascinating case wasn’t limited to just one or two random and vague occurrences. The haunting reached its peak between July and August 1884 when appearances of the figure were at their maximum.
Rosina claimed to have seen the ghost stand silently at the drawing-room window for nearly half an hour and her sister Edith reported the unnerving experience of being passed by a tall figure on the stairs during the night. Footsteps were also heard on the landings by both family members and staff. Rosina attempted experiments by stretching cords across the staircase which she said the apparition always appeared to pass through and remained unbroken. On another occasion, she also reported opening a door and allowing the ghost to pass through.

Andrew MacKenzie died at his home in Hove, East Sussex in 2001.