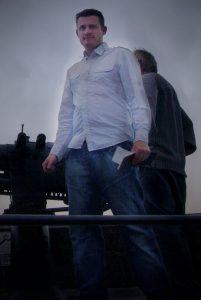 Ever since I can remember I have had an interest in the paranormal, the unexplained, mysteries and histories of the world. Possibly originally inspired by my parents, who have brought me up to question things, research and investigate things. Even if they were unaware that they did! I guess it was only natural for me to one day try my hand at investigating the paranormal.

After many years of feeding my paranormal and writing interests off and on I finally found something that brought them together. My wife and I watched some episodes of Ghost Hunters and Paranormal State, then followed it by discussing our knowledge and experiences of the paranormal. This identified a local “haunted” location known as Clophill Church. This little known ruin of an old church on a hill, soon became the focus for my first case. Which took form mainly as a research case written up in a little journal I had received for my birthday.

My first paranormal experience came when my wife and I went on a Paranormal Tour at Salisbury Guildhall. During a vigil our digital camera (switched off) vibrated across a desk towards us, I was hooked from there out! I knew I had to look for explanations, understand why this happened, but also begin to document my findings. I made the decision to create my own team, Farsight Paranormal Research Society. I continued to investigate the paranormal with the assistance and guidance of my team for the next few years with quite a bit of success. We have captured evidence of moving objects, unexplainable audio recordings and much more. Ultimately though our experiences grew as we investigated locations up and down the UK. Once again I documented these investigations on my Blog Site, personally and also in a few paranormal magazines too.

However all good things come to an end and at the end of 2013 I realised the need for a change of direction for myself. This meant the closure of Farsight PRS and the team. However this didn’t mean the end of my paranormal exploration, investigation and research; if anything its a new beginning. I now hope to investigate with varied groups and individuals where I can, especially some of the good friends I’ve met over the years that are also fantastic investigators too.