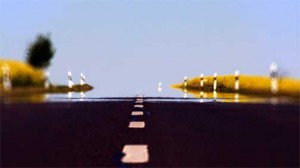 “Fata Morgana”, sounds like the name of a sorceress from legendary stories of King Arthur & the Knights of The Round Table, and believe it or not, that’s indeed where the term’s origins lay!

However it is also the scientific name for a natural phenomena that could explain a small amount of UFO reports in the Australian desert, day and night.

Many people report strange sightings in the Australian outback, day and night, of shimmering lights, strange glowing objects and other paranormal phenomena, usually described as a UFO, an unidentified flying object, (which when you think about it is a very broad area of objects, as anything you cannot classify that flies remains an unidentified flying object, of which the UFO community may need to make some more specific sighting categories – but that is a whole other area of discussion!)

Have you ever driven your car on a hot summers day and noticed that watery mirage out on the horizon, the one you can never reach, but is always there? That, right there, is associated with Fata Morgana, but the natural occurrence is so much more than that.

Fata Morgana  can occur on land or sea, it is an optical phenomenon (not an optical illusion as one can capture it on camera) that occurs due to rays of light being bent when they pass through air that is at differing temperatures, this is known as an “thermal inversion” which is where warmer air exists in a layer above a layer of cooler air. This is the opposite of normal conditions where air is usually warmer close to the surface and cooler above it.

What happens is distant objects on the horizon become part of the mirage our eyes see, and due to the air layer of hot & cold the mirage is then transferred to the layers of air, creating a “stacked up” image, that rapidly changes and appears to move.

Any object, lets say a distant car on the horizon, is suddenly seen above the road, possibly distorted and in the sky, moving quickly, almost darting in the air – sounds like UFO sightings you’ve heard about, right?

The really interesting dynamic in this is that it can happen at night as well, and is often seen in the Australian outback on hot nights, or really cold nights.

Fata Morgana can make the mirages our eyes see stack horizontally or inverted, mirror image, distorted, in fact it can distort objects so significantly that they become unrecognisable.

Now, before I go any further, we should distinguish the true Fata Morgana from an  “Ordinary Super Mirage” or “Inferior Mirage”.

An “Ordinary Super Mirage” is similar to the inferior mirage but the image is overhead instead of under the object, inverting the way the mirage is seen with human eyes.

An “Inferior Mirage”  is the terminology used to describe the classic mirage we all know, where water appears in the distance, often under an object like a sand dune and palm tree. It normally appears blue and water like, The real object reflected is usually the sky, or another distant object in the same direction. 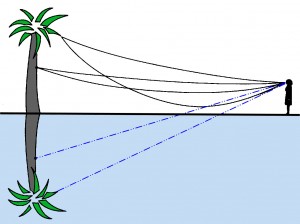 While both are similar in many ways to “Fata Morgana” there is more happening atmospherically that makes Fata Morgana a little more unique and much more likely to be the cause of UFO sightings.

As I said earlier in this article, thermal inversion is a strong part of this phenomena but it also needs an atmospheric duct which is a horizontal layer in the lower atmosphere, that tends to ‘guide’ light rays to follow the curvature of the Earth, these “ducts” tend to offer light rays less resistance than if the ducts were not present, meaning that light that is further away can be seen much clearer, but at the same time, distorted by the layer upon layer of hot and cold atmosphere.

This is where it gets a little weirder, a Fata Morgana can not only cause horizontal distortions but also vertical ones, making a recognisable image into something totally unrecognisable to the human eye. The phenomena can also magnify an image. 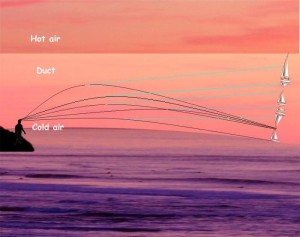 So, taking all that in, it boils down to this…If you have the right weather conditions, say a really hot day, followed by a cold night, that traps air in an atmospheric duct during a thermal inversion, if you stand at the right distance, about 9kms, on a slightly hilly, or a flat surface, you should be able to see distant images, car headlights etc, in a mirage form, that appears to be UFOs, or “light balls” similar to the “Min-Min” lights reported in Australia, the “Marfa’s Mystery Lights” in West Texas or the lights of “Ghost-light road” in Missouri USA…

This doesn’t debunk every UFO sighting of course, but it sure makes you think about many sightings you read about that happen in the Australian outback, could Fata Morgana be the cause??

For more on how the effect works please follow this link:

Researched and Written by © Allen Tiller 2014