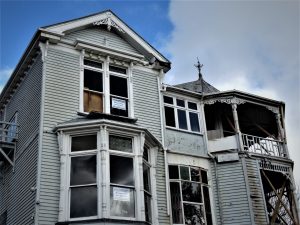 Stately but faded, this once-glorious historical home has been a long-standing presence on a massive 1246 square-meter site in Auckland’s central suburb of Freemans Bay, perched atop a large section alongside a huge mature pohutukawa tree.

Work is underway on the site, but the grand old dame is not being demolished. She is getting the facelift of the century.

Consent has been granted to relocate the now historically recognised and registered 1880s Victorian architectural gem on the property, allowing for a single-level addition. The years have taken their toll on the house’s architectural facade, which now looks worn, its paint peeling and faded. The weatherboard cladding is rotting; the formerly magnificent turret has rusted and windows are painted over and boarded up.

The two-storey statement villa home was originally owned by a successful merchant and Auckland Deputy Mayor Andrew Entrican. It’s second owner was businessman MP Captain William Crush Daldy; the tugboat named after him is still enjoying its own long semi-retirement at Devonport Wharf.

In the 1940s a Maori Trust bought the property and the house became a boarding house for girls attending local colleges. For 70 years it was known as Te Kainga Aroha, before it was put up for sale in 2014 over mounting maintenance costs.

Some of its voluminous rooms were partitioned to create additional spaces, and there is still schoolgirl graffiti on the wardrobes.

The house featured in Taika Waititi’s Hunt for the Wilderpeople as the home Uncle Hec, played by Sam Neill, stayed at towards the end of the film.

I spoke to the owner, who tells me they purchased the house three years ago but have been unable to touch it due to all the ongoing council red tape and a seemingly endless stream of fees and paperwork. Work is now underway to slowly and delicately roll the house forward onto its new foundations a few meters from is original position.