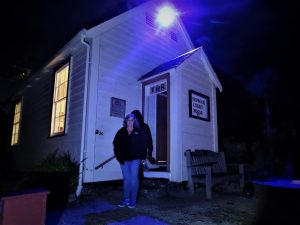 This story actually starts last Halloween, when the Howick Historic Village invited Haunted Auckland to hold a ghost hunt at the village as part of their Annual Halloween Event. As a result, fellow team member, Lisa, and myself ended up holding short investigations in various dark buildings around the village with five or six victims (sorry budding ghost hunters). Our group was an enthusiastic and surprisingly knowledgeable bunch (in fact a few were serial ‘ghost hunt groupies’ and had been to several of our events).   We didn’t seem to have anyone who was too nervous to enjoy sitting in the cobwebby pitch black buildings with various pieces of ghost hunting equipment beeping and/or flashing to alert us of any rises in temperature, EMF levels, air pressure etc.

We had a great evening moving from building to building within the village with our equipment and we held many mini investigations which included communication sessions.   The ambience of the night was enhanced by one of the ladies phones malfunctioning.   It seemly gained a life of its own and randomly would turn itself on and take photos and videos when we least expected it. This was a little creepy but caused much hilarity, as we were pretty sure that Vicky’s phone had not actually been possessed.   Our team of rookies managed to debunk several thuds and odd noises that night, including when we heard banging coming from one corner during our investigation of the old Howick Courthouse. It turned out to be the window rattling in the wind and I was proud that the team of newbies did not immediately declare it was paranormal, but instead, after going outside to see if there was anything that may have been banging against the building in the wind it was discovered that one of the windows was actually a little loose and would rattle when the wind blew.

There was one thing we could not easily debunk however.   During our investigation in the Howick Courthouse, we held an evp session and while everyone was quiet most of us heard a man’s voice say something. It seemed to originate from an empty corner of the room. As we had done earlier with other occurrences, we worked together to try to come up with a rational explanation for what we had heard, but we could not come up with a definite explanation for the voice. Of course it may have been someone on the nearby road outside the building but the village was locked so it was a (admittedly short) distance to where a member of the public may have been standing. Upon hearing the voice a couple of the team were immediately dispatched to see if there was anyone outside or nearby but nothing was found despite them having a good look around. As is standard procedure we then attempted to replicate what we had heard by asking members of the team to stand outside the building and also on the road outside the village and speak but we were unable to replicate shat we had heard. That voice was never fully debunked and piqued my interest in investigating further in that building.

As you can imagine then, when the Haunted Auckland team were granted access to the village to hold overnight solo investigations I jumped at the chance to spend the night investigating alone in the Howick Courthouse building!

Upon researching the building it appears that The Courthouse was built in 1848 on the corner of Baird and Moore Streets, Howick and was moved to Picton Street in 1910. Besides being a courthouse the building has been used as a library, a school and lastly an engineers office. It was then moved to the Howick Historical Village in 1979 and now stands near the village square. The interior of the building has been set up as the courthouse would have looked originally with the old, wooden floor, brown wooden walls, pew style seating at the back for members of the public who wanted to watch the proceedings, a brown wooden-walled dock on either side of the single room, a court officials table in the center of the room and the judges stand (complete with judges gravel) in the front. There were various historical items displayed around the room including old handcuffs, period clothing, photos ect.

Upon arrival at the village I went to make sure the building was as I remembered it. (Sometimes the village will alter how a building is displayed and will change the layout and add extra or remove displays and exhibits or mannequins). ……   Although the overall ambience was stark and uncomfortable I was delighted to be able to make my bed up at the back of the room. As I was doing this I moved the wooden pews to make a platform to put my self-inflating mattress and sleeping bag on and saw with some alarm that “something” retreated very quickly into a large crack in the floor. I eyed the crack suspiciously while waiting for whatever it was to show its self again. When it became evident that I was not going to see whatever it was (“Please Don’t Let it be a Mouse!!) any time soon, I continued to set up my bed (in the opposite corner of where I had seen the “something” ), took photos and video of the room to document where I would be sleeping and scanned the room for emf (of which there was nothing of note). I then left an audio recorder, emf meter and a video camera going while I left the building to join the rest of the team for an investigation of Puhinui House and other buildings around the village.

Upon my return much later that night (in fact much later than I would have liked), I noted, with relief that the “something in the corner” seemed to be, in fact, a rather large spider and not a mouse, as I had earlier feared. (Ghosts and spiders-who-stay-on-their-side-of-the-room are fine for me. Just don’t show me a rodent.)   The one-roomed building actually felt very calm and serene and even after I had turned the lights out to begin my investigation I was not nervous about sleeping there that night. I tried several communication sessions in different areas of the room but apart from a clunk which came from beside me while I was in the front of the room and some unusual emf readings at the back of the room (close to where I would be sleeping) there really was nothing happening. Eventually about 3am I set up an infrared cam and an audio recorder (my trifield meter and EDI data logger had been turned on as soon as I entered the building to retire for the night) to document anything that may have occurred while I was holding my last communication session of the night while I was in my bed. At this stage however, my 11-hour workday followed by the investigations of that night caught up with me, and despite my best intentions of holding a lengthily final communication session from my bed, I fell asleep very quickly.

Upon reviewing my video from that session however there does seem to be a light that shows shortly before the video cam turns itself off. When I awoke in the morning and found the video camera off I assumed that the battery had run out but when I went to review several days later I noted with interest that there was still life in the battery and memory on the card so the camera should not have ceased recording until much later. The light came on for a second or two one minute before the camera switched off. I have tried to recreate what I saw in the video (it was actually reflected in my water bottle which was beside my bed) and suspect that it was from my EDI device, which may have been indicating a sudden significant drop in temperature at that time. The device was actually several meters away and not actually visible on camera as I had my cell phone close to the bed and I did not want my phone interfering with the readings my EDI device was logging. Surprisingly, however, upon checking the data the EDI had logged throughout the night there did not seem to be a sudden drop in temperature at that time! I guess I’ll never know for certain what the light was, but would certainly love to spend more time in that building!

See the light anomally in this short clip.    https://youtu.be/xc-YEeFBZ0I

It was indeed a huge privilege to be able to not only investigate Puhinui House and other buildings in the village again, but to also spend the night alone in the historic Howick Courthouse and I must sincerely thank the Howick Historic Village for this amazing opportunity. I’d highly recommend that anyone young or old with a spare few hours go and take a look at this really interesting, authentic and well maintained attraction.