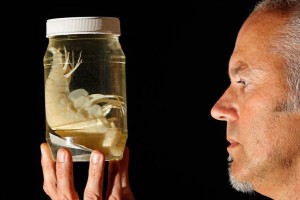 Alan Jamieson with one of the supergiant amphipods.

From the depths of the Kermadec Trench, New Zealand scientists have retrieved the largest known examples of a creature that looks like a giant albino flea.

On a recent research trip to the trench to determine how far down fish could be found, staff from Niwa and the University of Aberdeen found “supergiant” amphipods – deep-sea scavengers that feed on dead material.
“the first big trap came out, first of all we said, great, we’ve got five fish,” Niwa’s Ashley Rowden said.
“But then we looked and said, `What the hell is that?”‘
Not only were the amphipods a record size – the biggest was just over 28 centimetres – but they were found seven kilometres below the ocean’s surface, far deeper than before.

Deep-sea amphipods, a relation of the sandhoppers that can be found on any beach, are typically two or three centimetres long. The research team knew of only two occasions when “supergiants” had been found anywhere in the world, with the last Kermadec sightings in the 1950s.
The discovery highlighted how much more there was to learn about the 10km deep Kermadec trench, Dr Rowden said.

“The marine realm of New Zealand is huge and it contains some unique creatures, yet the number of samples we’ve taken from it is incredibly low.”
The amphipods were now in storage at Niwa’s laboratory in Wellington, but would soon travel to Aberdeen so scientists there could determine if they were a distinct species.

Dr Rowden said they also hoped to work out why the amphipods were so big. “We’re really waving our arms at the moment – there are lots of questions swimming about.
“We don’t know how big these things can get.”