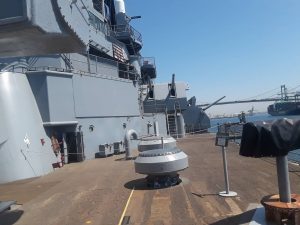 USS Iowa began military service on Feb 22 1943.
She was used initially as an escort ship for ships transporting President Roosevelt, and other ships travelling in the Atlantic Ocean, but was also involved in the Marshall Islands campaign, Okiniwa landings and in assault targets in Hokkaido and Honshu during WWII. The ship was also used in the Korean War and was decommissioned in 1958, but remained in the Atlantic Reserve Fleet until 1983, when she was moved to Louisiana to undergo a modernization. The USS Iowa was however, recommissioned one year ahead of schedule but a mandatory US Navy inspection was not conducted at the time and it soon became apparent that many necessary repairs to the engines and guns had not been completed satisfactorily.
It was two years later, in 1986 when she finally had her inspection, which revealed many problems with the engine, gun turrets, electrical wiring and fire fighting system.
As a result of the problems found, it was then recommended by the Rear Admiral that the USS Iowa be taken out of service immediately, however the Secretary of the Navy instructed that the ship remain but that the deficiencies be corrected. A month after her initial inspection the ship again failed an evaluation, but within a remarkably short time the Iowa was reevaluated and passed. The ship was deployed to the Persian Gulf and returned for maintenance in March 1988.
At the same time a new captain was named for the ship. The new captain then cancelled a one million dollar repair package for the ship, which was to include repairs to the main gun turrets, lighting, electrical, powder hoists, and hydraulic systems. Instead the funds were to be spent on overhauling the Iowa’s power plant. After this overhaul, the ship then set sail to do refresher trainings. Over the next few months the sailors did little training with the ships main guns however, in part because of serious issues experienced with the main gun turrets.
The gun turrets needed maintenance for operational readiness and the morale of the gun turret crews suffered.
In January 1989 the Master Chief Fire Controlman and the Lieutenant Commander persuaded the Captain of the Iowa to allow them to experiment with ‘supercharged’ powder bags and specially designed shells. The Captain believed that top Navy officials had approved these experiments, which was not correct. The experiments had, in fact, been authorized by a mid level beauricrat who did not have the authority to do so nor was he aware of the background of the vessel. Officers in charge of the gun turrets believed the experiments were dangerous due to the age of the guns and turrets and the numerous maintenance problems that had previously been encountered.
Unfortunately these concerns were not conveyed to the Captain at the time and the Chief Weapons Officer refused to halt the experiments. As a result, on 20 Jan 1989 Turret One fired six experimental shells using the supercharged powder bags. After this, the gun chiefs for Turrets One and Two refused to participate in further experiments due to safety concerns. A week later, during a training exercise, there was an incident due to one of the experimental powder bags smouldering before the breech-block was closed, which caused the gun to discharge on its own. Ensign Dan Meyer later described this incident.
He reported “It was the most frightening experience I have ever had in my life. The shock wave blew out the turret officer’s switchboard and the leads. We had no power, no lights for a time. Men were screaming. There was panic.” 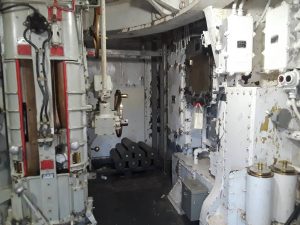 On April 14 the USS Iowa sailed to the Caribbean Sea near Puerto Rico to participate in a field exercise.
During preparations for the firing exercise it was found that the center guns compressed air system for Turret Two was not operating properly, however this information was not conveyed to the appropriate personnel at the time. It was decided during an exercise briefing the following morning that Turret Two would participate in an experimental firing in which Turret Two would fire 2700lb shells. The powder lots used for this experiment were the oldest on board the ship and were designed to fire 1900lb shells and even had printed on the canisters “WARNING: Do Not Use with 2,700-pound projectiles.”.
The center gun crew were very inexperienced with the rammerman being of particular concern as he was an integral part of the firing process and had never operated the ram during a live fire shoot. Ramming the powder bags into the gun was considered the most dangerous part of the firing and required a high level of training and expertise.
At 8.30 am on the 19th of April 1989 the exercise commenced with an immediate misfire from Turret One. Turret Two was then commanded to load and be ready to fire. Turret Two reported that they had a problem and then seconds later there was a massive explosion producing a fireball of between 1,400 and 1,600 °C, travelling at 610 meters a second and with a pressure of 28 MPa . The explosion caved in doors, buckled bulkheads, and the fireball spread through all three gun rooms and the lower levels of the turret.
The fire and heat then ignited the 910kilos of powder bags that were stored in the area and a few minutes later a carbon monoxide build up caused a further explosion. The intense fire was extinguished within about 90 minutes and the bodies and remains of 47 dead crewmen were quickly removed without documenting their location or condition.
These bodies were flown the following day to Puerto Rico and then on to home. A clean up crew was told to make Turret Two look as normal as possible, and over the next day the crew cleaned and painted the inside of the turret and threw damaged or loose equipment into the sea. There was no attempt to preserve any evidence and a team of Naval Investigators stationed nearby was told that there was no need for their services. Later a media report indicated that the US Navy felt that the explosion had been cause intentionally by a crewmember as revenge after a homosexual encounter but there is still a lot of controversy about this. All 47 crew inside the turrets perished, however the turrets contained the force of the explosion so that men working nearby escaped without serious injury and the rest of the ship was relatively unscathed. A small memorial to the dead sailors was erected at Iowa Point on Norfolk Naval Station and each year on April 19 a memorial service is held. The turret underwent superficial repairs but was never put back into operation.
The USS Iowa was decommissioned in 1990 and berthed at the Naval Education and Training Center in Newport. The ship was then towed to San Pedro in California in 2012 to become a floating museum. 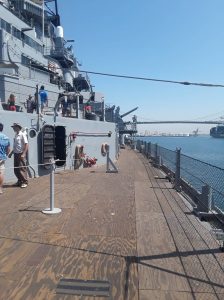 Many believe the ship is haunted by those unfortunate sailors who lost there lives that fateful day in 1989 and there have been numerous reports of sightings, unexplained sounds and feelings of being watched by visitors to the ship. The spirits sighted are said to be smiling and look happy and one visitor to insists that he was saved by a helping hand as fell fell from the top deck!. As you can imagine a visit to this fascinating ship was high on my must-do list during this visit to the States. Hubby was super keen and I was intending to tag along and do a bit of ghost hunting while he looked at “man things on the ship”.
However upon researching the history and story of the USS Iowa, I became hooked and was really keen to see this ex United States Navy Battleship which had endured such a long string of bungles, mistakes and incompetencies that eventually caused the deaths of 47 unfortunate sailors. We spent a few hours aboard exploring this ex battleship documenting the location and speaking with servicemen about how conditions aboard would have been for the sailors at the time. You can imagine my surprise then, when, as I held onto the side rail while walking down the gangplank to leave, I felt a hand touch mine.
It felt as though someone behind me had put their hand on mine for a second or two! I really thought someone must have been behind me and was surprised to see no one there when I turned around to see who it was.
We thoroughly enjoyed our visit to this floating museum and would recommend a visit to anyone visiting San Pedro in Los Angeles.