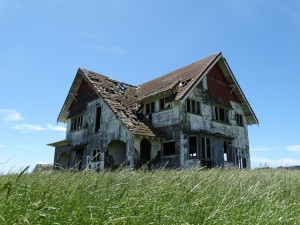 The abandoned house at Ahiaruhe has given rise to lots of legends.

Perhaps the most frequently enquired after house in Wairarapa is a derelict mansion that sits atop a ridge in the Ahiaruhe district, across the road from Stonehenge Aotearoa. It must surely be the most photographed building in Wairarapa.

It has all the requisites to become a local legend. It sits in a very prominent position, high above the road from Carterton to Martinborough, and the many people who visit Stonehenge Aotearoa pass by it. It has a desolate feel – many are sure that it has a tragic history and insist that it is a house haunted by the spectre of a woman killed in its confines many years earlier. Others insist it is built on the remains of an old Maori village and the spirits of generations of ancestors visit at night.

The reality is slightly more prosaic than that, although one element of the strong myths that have built up about his abandoned homestead may actually be true. The house may have seen deaths.

The story starts in Palmerston North, where the house was constructed in 1925, for the ex-medical superintendent of Palmerston North Hospital, Dr G.A Forrest. Doctor Forrest was born in Motherwell, Scotland, the son of a doctor, and trained at Edinburgh University. In 1911 he came to New Zealand, working at Oxford, Canterbury then served three years in World War One with the New Zealand Medical Corps. She he returned he took up the position of medical superintendent of Palmerston North Hospital before resigning and working in private practice in the house he built in Broadway Avenue, then called Broad Street.

He was not to work in the house for long, dying in October 1929. The house was subsequently owned by two more doctors (Dr Wilson and Dr Swallow), both of whom used the building as a surgery and residence, until 1972. In 1984 it was became the legal offices of Fitzherbert Abraham & Co. By then the garage had been demolished and a brick wall constructed along the front. In 1986 the house was removed to Ahiaruhe by a local farmer.

The building was shifted in two pieces, and it took some time before the second storey was added to the ground floor. Before it could be completed, family difficulties led to the project being abandoned, and the house now sits along and forlorn on the top of a ridge, overlooking the Wairarapa plain and the Tararua Range, and open to the weather from all directions.