This is just some of my own thoughts and doesn’t represent the opinions of Haunted Auckland.

I’m not a physicist or a mathematician, so someone who is may tell me I’m talking a load of rubbish.

However, the concept of time not being linear interests me and I think worth sharing with others to at least think about.

There is a theory that hauntings of a non-intelligent nature may be just residual energy. That is the earth or buildings can absorb energy from traumatic events and this energy is released over time or under certain circumstances and as such, a certain event is replayed over and over. I’ve always had trouble accepting the residual energy theory for hauntings. My reasons are that what is considered residual hauntings often depict non-traumatic events such as a ghostly person walking through a building or across a garden, up or down stairs or just standing as an apparition; I question why such mundane events would leave an imprint on the earth or building and why that would replay over and over. I also wonder why we don’t experience this more often and even in our own homes where we may live for many years. Perhaps there’s another explanation for these events. What if moments from the past, present and future can exist concurrently? What if time isn’t linear?
We perceive time as being linear in that we are in the present moment and then we move to the future, which becomes the new present moment and old present moment becomes the past. In other words, time seems to continually flow forward. However, there are various theories which suggest that time may not be linear and I’ve have wondered whether these may be able to explain some paranormal events.

The tesseract is shown below (Figure 2).

If we think about our universe as a 3 dimensional cube and that time is linear, linear time would look like that shown in Figure 3. The tesseract theory however, says that the tesseract behaves as a space warp or a wormhole, a portal from one area of space to another which is possible through the bending of the structure of the space-time continuum.

Figure 3: Representation of linear time in a 3 dimensional universe. 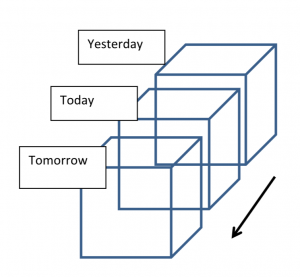 The block universe can be described as a four-dimensional block, which is made of space time and all of the space and time of the Universe are there in that block. We live inside of this block, though we are not aware of it and we don’t know how big the block universe we live in is, or whether it has a beginning or an end. According to the block universe theory, the past, present and future all exist at the same time and are equally real. Imagine the universe again as a cuboid that contains everything that has ever happened and will ever happen. In this block the passing of time is an illusion, time doesn’t flow; there is no specific past, present or future. It’s hard to grasp, but essentially I understand it as meaning that where ever you are in the block, will for you be the ‘present or the ‘now’. If you were to move to another part of the block, that would also be your present or now. According to the block universe view, time or temporal relations of “earlier than” and “later than” does exist but these relations hold regardless of where anyone is located in the block.
The fact that we perceive time as moving forward in the block comes from the fact that the block picture treats time as another spatial dimension.

Figure 4: The Block view of the universe

Non-linear time and the paranormal

What could this mean for the paranormal? Currently what we consider normal is what we can perceive in our 3 dimensional world. Anything that doesn’t fit into this isn’t considered normal, hence it becomes beyond normal, or paranormal. However, if the universe was 4 (or more) dimensions and time wasn’t linear but another spatial dimension, perhaps what we consider paranormal would actually just be normal.
Something like the hypercube where space-time continuum can bend or warp, or a block or growing block universe could explain many paranormal encounters or experiences. For example, in the block universe the past, present and future are all equal realities and are happening concurrently. The lives of people in what you consider the past and their conversations could be playing out at exactly the same time as what you consider your present. In addition, events that we have yet to experience are also playing out somewhere else within the block universe.

Is it possible for different realities happening concurrently in the block or growing block universe, to interface, or connect, through a warp or bend in the space-time continuum or by a wormhole or some other means? Could these theories potentially explain the electronic voice phenomena (EVP) or disembodied voices that we pick up as paranormal investigators? Are we picking up the chatter of lives being played out in other parts of the block or growing block universe that somehow interfaces or connects into our reality of what we think is the present? If it could, this might also explain why people report seeing ghosts moving through a building or landscape or some historical battle scenes being replayed.

One famous example of this is from York, UK, where I used to live. In 1953, a young plumbers apprentice was working in the Treasurer’s House, York, England, when he had a scare of his life. As he worked in the cellar, almost two dozen Roman Soldiers appeared from one wall, crossed the cellar and disappeared into the opposite wall. Amazingly though, the soldiers’ legs were cut off at the knees as if they were walking on a road which was at a lower level than the cellar floor.
The block theory could potentially explain why some people have premonitions (the feeling that something bad is about to happen), and precognitions (visions of the future). May be this even explains déjà vu?

Perhaps our lives are just replaying over and over within the block universe or the growing block universe.
It might it also explain one question I’ve heard numerous times, of why we don’t see dinosaur ghosts. Perhaps it’s to do with where we are in the block and that events happening closer to us in the block are more likely to connect through a bend or warp in space-time with our area of the ‘now’ in the block than things much further away from us in the block, i.e. which we consider our distant past.
All this is still theory and of course we still can’t travel through time. There are some physicists who believe that time does pass and that it’s not an illusion and are developing theories to try and demonstrate this.

However, I will leave you with a thought from Einstein to consider. In 1952 he writes in his book Relativity: