The Rocks is one of Sydney’s most historic areas, a favourite of tourists and locals alike. As the oldest area of Sydney, The Rocks features a wonderful mix of past and present. The Russell was one of the first hotels in The Rocks and maintains our emphasis on old world charm and personable service to this day. 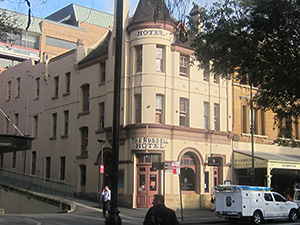 The Rocks was the first European settlement in Australia, established by Captain Arthur Phillip of England in 1788. Originally settled as a penal colony, convicts were tasked with the job of erecting government buildings and housing for officials. These original buildings were built using hand-made bricks or blocks of local sandstone – hence the name “The Rocks.” In 1900, the bubonic plague struck Sydney. Many worried that the historic and densely populated Rocks area would be the worst hit. Although only three people in The Rocks died of plague, the Government bought the area and resumed it. Parts of The Rocks were demolished, but luckily many remained. The construction of the Sydney Harbour Bridge in the 1920’s required the demolition of hundreds more building in The Rocks. Further construction developments, such as the Cahill Expressway in the 1950’s, caused more alteration to character and landscape of The Rocks.

Set in the historic heart of Sydney’s The Rocks, the 1887 construct of the Russell Hotel is a piece of Australian history which retains all of its old world charm and decor  Decorated with traditional furniture, rooms add distinctive touches like open fireplaces or bay windows. Encompassing Sydney’s oldest bar, this colonial masterpiece is a must stay in the midst of all that Sydney’s harbour area has to offer.

Historical data of the Russell Hotel dates back to 1790. A ‘Moveable hospital for his Majesty’s distant possessions’, was erected on this site during July 1790. The portable hospital was removed in 1816 after the Rum Hospital was established in that same year. Samuel Terry built on this land between 1820 – 1835, erecting shops and houses. In 1845 the Sydney Municipal Council listed the property as a house and shop, constructed of stone, roofed with shingles, of two floors and seven rooms and with a back kitchen. By 1853, it had become a public house trading under the name of ‘Patent Slip Inn’ with Robert Whitemore the licensee. (A ‘Patent Slip’ is a type of dry dock where a ship can be pulled from the water on rails and repaired or cleaned).

In 1858 John Gallagher was listed as the licensee and remained as such until about 1870. During 1887, the Patent Slip Inn was demolished and Thomas Brennan erected a new hotel called ‘The Port Jackson Hotel’, of brick and stone walls and a slate roof. It had 3 floors and 12 rooms with a net income of 450 pounds. In 1900 W.Russell became the licensee with Tooth & Co becoming their proprietors. Tooth & Co also purchased the properties to the rear of the hotel, 6 – 10 Globe St and extended the hotel by rebuilding the properties during 1910 – 1920.

During the following years the Russell Hotel lost some of its charisma when converted to a rooming house. In 1981 restorations work began on the Hotel, which not only covers the corner of George and Globe streets but also includes the 2nd and 3rd stories above ‘Rockhound’ (street number 141), ‘The Sheepskin Shop’ (street number 139) the ‘Fortune of War Hotel’. The Russell Hotel is now a Boutique Hotel offering a range of different priced accommodation with a continental breakfast. It sits on the very popular George Street very close to Circular Quay, The Opera House and Sydney Harbour Bridge. The Russell Hotel also features a wine bar on the first floor.

It’s one of the best positioned hotels in the country  right on George Street at Sydney’s Circular Quay but this Rocks B&B is supposedly haunted by an old sailor. A former sailor’s hostel, the sandstone building is certainly no stranger to nefarious activity. Though the mischievous undertakings are still occurring today thanks to an extra guest who doesn’t appear on the register – an old sea-faring apparition. It is thought that the ‘extra guest’ dates back to Sydney’s early colonial days.

Most of the paranormal activity seems to center around room number 8. Visitors have described seeing a ghostly sailor in no hurry, standing still and staring directly at them. Sometimes he will watch them sleep and other times he will be seen strolling the corridors before vanishing. Hotel employees have claimed to hear mysterious sounds of someone walking in the evening causing the floors to creak. When they go to investigate these sounds, however, they see no one there is no physical person in the vicinity and no apparent rational explanation leading many to believe the sounds are of a paranormal nature. Could it be the sailor out for a midnight stroll?

Mark joined up with Karen and Allen from Australian paranormal researchers, Eidolon Paranormal to investigate the Russell Hotel overnight. The three paranormal investigators met for the first time at the hotel. Allen and Karen had spoken to the cleaners briefly upon their arrival and were told stories of cold spots, doors opening and closing, footsteps in hallways when no-one was present, and feelings of being watched.

After checking in and unpacking in our rooms, we then proceeded to have a walk through this historical multi-leveled Sydney location, before heading out for a walk to find some dinner, on the way stopping in on a few more historic locations and iconic sites on a leisurely wander around the CBD. Dinner and ice cream was found at beautiful Circular Quay as we took in the night sights.

Places visited and documented this night were the Fortune of War (Sydney’s oldest pub) and The Orient Hotel. The Orient Hotel management were very welcoming and helpful and us gave a tour of its allegedly haunted areas and a brief run down of paranormal activity that happens in the hotel. Please refer to the Orient Hotel Photo report in the Investigation section. 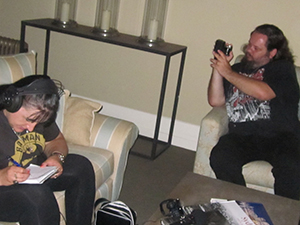 They then returned to the Russell Hotel to begin their investigation. Starting in the sitting room, Night vision and Full spectrum camera’s (Thanks to Apparition Technologies) were turned on and some EVP sessions began, however noise from the street, and guests returning to their rooms through the old creaky hotel corridors and hallways contaminated a great deal of what was captured. Karen took down Mel Meter readings during our EVP Session in the Sitting room. Unfortunately, there wasn’t a great deal to record.

It was then exploration began, Room 8, the notoriously haunted room had a guest so remained off limits, but a small, quiet EVP session was conducted in the dead end hallway outside. Every hallway was then walked through and recorded. After this EVP sessions were conducted in room 4 and room 5 before we wrapped up our night and headed of to bed.

Mark – “I didn’t realize the area we would be staying in would be so noisy. EVP sessions were pretty much a waste of time as the surroundings and situation may it too uncontrollable. Drunken bar goers, dogs, traffic and street cleaners all made an appearance on my audio and video recordings.”

Besides a few odd noises, that could be explained away as the building settling, vibrations from passing traffic, or indeed other guests in the Hotel, we didn’t personally experience anything we could deem as ghostly or paranormal.

The Russell Hotel has long been listed on the top ten lists of Haunted Hotels around the world, usually coming in around 8th or 10th place. Room 8 is considered to be the “most haunted” room in the building due to a number of guests over the years seeing an apparition of what looks to be an old sailor standing at the end of their bed staring at them. Some say that some of the girls from when the Hotel was used as a Brothel, many years ago, still walk the halls as well.

Mark – “Whilst we didn’t experience or capture anything conclusive at this overnight investigation, that’s not to say the hotel isn’t haunted. So many people have made claims of strange activity through many, many years. I just don’t for one minute believe that they are all misguided, drunk or lying.”

“In my opinion, I feel there is some truth in the stories and due to the hotels popularity with the paranormal investigation field and the regularity of research groups staying there, I‘m quite confident that the prime evidence will be captured in time. Be it a residual or intelligent haunting, (or perhaps both?) I feel there is definitely ‘something’ ‘living’ quite happily within the spooky retro surroundings of The Rocks Russell Hotel.”

Eidolon Paranormal – “Haunted? Whilst we didn’t experience anything we can report ourselves, that does not mean the Hotel isn’t haunted. The Russell Hotel has long been listed on the top ten lists of Haunted Hotels around the world, usually coming in around 8th or 10th place. Room 8 is considered to be the “Most haunted” room in the building due to a number of guests over the years seeing an apparition of what looks to be an old sailor standing at the end of their bed staring at them.”

“We spoke to the cleaners briefly upon our arrival and they told us stories of cold spots, doors opening and closing, footsteps in hallways when no-one was present, and feelings of being watched. Some say that some of the girls from when the Hotel was used as a Brothel, many years ago, still walk the halls as well. We also have found at least one reference to a death in more recent times, could this staff member still be walking the halls of the Russell Hotel seeking vengeance, or perhaps peace, from a crime in the 1950’s?”

A big thanks to Allen and Karen of Eidolon Paranormal. Was great meeting you two and I had a fantastic time roaming the spooky side of The Rocks with you.