Paddy Freaney, who claimed to have spotted the massive, but long-extinct, Moa in the Craigieburn Range, has died. A publican in the high country he loved and climbed, Freaney’s claim that he and two hiking buddies spotted a 6-foot Moa – evidence he tried to support with a photograph – sparked a cryptozoological mystery that was much debated at the time.

As an aside, I’d like to say a few things about Freaney. To be a hotel owner in Arthur’s Pass, the glorious high country between the South Island’s west and east coasts, is enough of a life achievement in my eyes. But Paddy was also a former member of Britain’s elite SAS squad and an avid mountaineer. He was a man of accomplishment, in other words, not your run of the mill publicity seeker.

But let me also tell you a little about the Moa, and I can’t believe that it has taken me this long – about 600 posts – to do so. The Moa, a massive flightless bird, was a legendary part of early New Zealand. There were many kinds of Moa, ranging in size from slightly larger than a turkey to the bad boys coming in at 12 feet and weighing up to 550 pounds. Now that’s a big bird.

Common wisdom has the flightless and Emu-like Moa being hunted to extermination by the Maori by the 1500s. But there have been persistent sightings of Moa – and books written about such claims – well after the Europeans settled here in the 1800s. Paddy, who moved to New Zealand and became a well-known mountaineer, claims he and his two hiking buddies came across a 6-foot Moa in 1993. 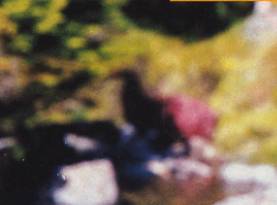 His claim, because of who he was and because of the photo he took, was taken very seriously at the highest levels of government. Still, many debunkers soon appeared and claimed Paddy’s sighting was fictionalized, that the photograph was everything from a fake to a red deer. Paddy was upset and outraged and spent many years trying to regain his good name by launching expeditions to find proof that the Moa was out there.

Paddy was not the only person to claim to have seen signs of Moa, despite common and scientific wisdom denying any realistic evidence that Moas lived past the 1500s. Cryptozoologists like Rex Gilroy claimed to have taken casts of Moa footprints from the Ureweras range or made other claims about their current-day existence. Gilroy claimed these proved the later-day presence of the smaller scrub Moas, measuring between 90 centimeters and about 1.5 meters.

I’m agnostic on this subject, but I will say that the dense, impenetrable scrub and huge isolation of much of New Zealand would be ideal for a species to go undiscovered. Not to go all Nessie or Yeti on you, but this place could hide the Titanic for a thousand years.

There is much literature on this subject (www.pauapress.com), which you are free to read. Paddy, who was by all accounts a serious man, spent much of his life trying to prove that he was not a fraud. But the legend of the still-roaming Moa, so central to the life of early Maori, persists. 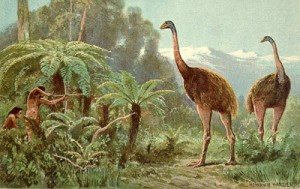 Here is a narrative of Paddy’s story. “They claimed that the creature they saw stood about 3 feet off the ground and had a thin, long neck, of another 3 feet, ending in a small head and beak. The bird had reddish brown and grey feathers that covered its entire body with the exception of its legs below the knees, a feature Heuvelmans later supported by stating that there was no evidence that the Moa did not have feathered legs.

“Seeing the three men the Moa took off across a steam, Freaney, an outdoor survival expert with the SAS, gave chase and was able to take a photograph of the Moa at a distance of nearly 115 feet. He also snapped a picture of what he thought was the bird’s footprints on a rock and of a similar print in the river bed. The resulting out of focus picture appears to show a large, medium brown bird with a horizontal body, a tall, erect neck and a head that may have been looking toward the camera, a clear view of the creatures legs is obstructed by a rock formation.

“The photo was given to an image processing group at the University of Canterbury’s electrical and electronic engineering department for review. After studying the blurry photograph for 3 days Kevin Taylor, spokesperson for the group, announced that the analysis had gone as far as it could and, in the groups opinion, the object in the photo did appear to be a large bird. The success of this ruling did not last long however as former University of Canterbury postgraduate zoology student Richard Holdaway announced that after he studied the photograph he was able to determine that the object was nothing more than a red deer, stating that the neck was to thick to belong to a bird.

“As a result the Department of Conservation backed away from its announced plan to search the area, Freaney offered to mount an expedition himself, if nothing else to clear his name after rumors that he hoaxed the photo began to circulate, but his offer was declined and the damage was done. Weeks after Freaney’s sighting bad weather in the back country all but eliminated the proof of his Moa encounter, especially the footprints in the river bank.

“On February 22, 1993 Freaney was interviewed by renowned Cryptozoologist Loren Colemen to clarify some points of the report. Freaney stated that he had turned over the original negatives for analysis, but results of that examination proved inconclusive. Freaney also stated that the bird was definitely larger than any emu he had ever seen in Australia and that the light brown feathers appeared to stop at the knees.”

From all I’ve read about Freaney, he seemed like a class act sorely lost. RIP, my man.