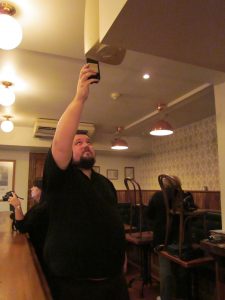 The term “energy” is one of those words which has different meanings depending on its usage and your point of view. From a scientific perspective it is used in physics to denote a property which can be transferred by the interaction of physical objects. It is a very broad concept which covers many times of transfer, for example gravitational energy, thermal energy, chemical energy, kinetic energy etc. In other uses, energy can refer to the driving forces of the mind, in the form of mental or psychic energy, or as a “life force” generated by living beings.

My personal belief is that claiming ghosts are made of, or draw upon, energy is a difficult concept without being more specific about the type of energy involved.

If we assume that ghosts are visible physical objects, they must either have radiant energy (i.e. they give off light), or must be made of matter which would reflect light which would enable us to see them. If we assume ghosts can move objects, then kinetic energy must be involved. If we assume the presence of ghosts can cause cold spots, then a transfer of heat energy is occurring. These forms of energy are all well understood and measurable, however none of them has been consistently or conclusively linked to paranormal phenomena.

I cannot personally comment on the esoteric forms of energy, being life-force or psychic energy, as these are more closely linked to belief systems which I do not subscribe to. However I believe that clearer distinctions should be made between the uses of the word “energy” to avoid giving the semblance of scientific credibility to concepts which have no basis in science.